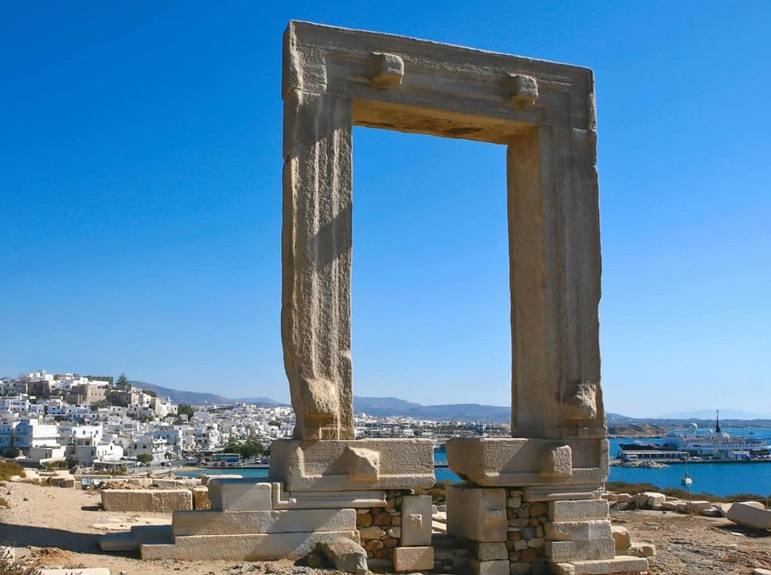 Naxos and our villages

Safe and adorable. Calm and authentic. When Nikos Kazantzakis wrote for Naxos, decades ago, imagine everything you see with your “eyes” when you first see it. The largest and most fertile island of the Cyclades, hosts one of the highest mountains to the most heavenly beaches that “embrace” you, picturesque scenery that will completely amaze you. The Plains succeed barren areas, mountains, valleys, picturesque villages, monuments and glorious sandy and wild beaches.

It stands proud in the heart of the archipelago and not … begging anyone to come in its way. It knows, you see, that those who are looking for something pure and “clean”, will sooner or later lose themselves in its paths …

The first view you get stepping off the boat, that immediately excites your imagination is a huge marble gate. Portara, trademark of Naxos, is the most unusual monument in the Aegean Sea, like a magnet drawing you near it. Do not be overwhelmed, walk along the road that leads you near to the Temple of Apollo and reserve the time to see the sun getting ready to make a splash into the Aegean, to really make it worth the ride up here.

Next stop the impressive Castle Town. The Venetian Castle of Naxos will give you a tour full of pride in the past and will impress you with how well preserved it is. The … trails will lead you to the Venetian Museum, which is an experience you will never forget !

It will not take you long to adjust to the main town of Hora so fasten your seatbelt as you catch yourself at the wheel of discovering the most distant beauties .. Naxos has more than 60 scattered villages, which with the help of residents, maintain traditional color and natural beauty.

Let us begin then, escaping to the island... 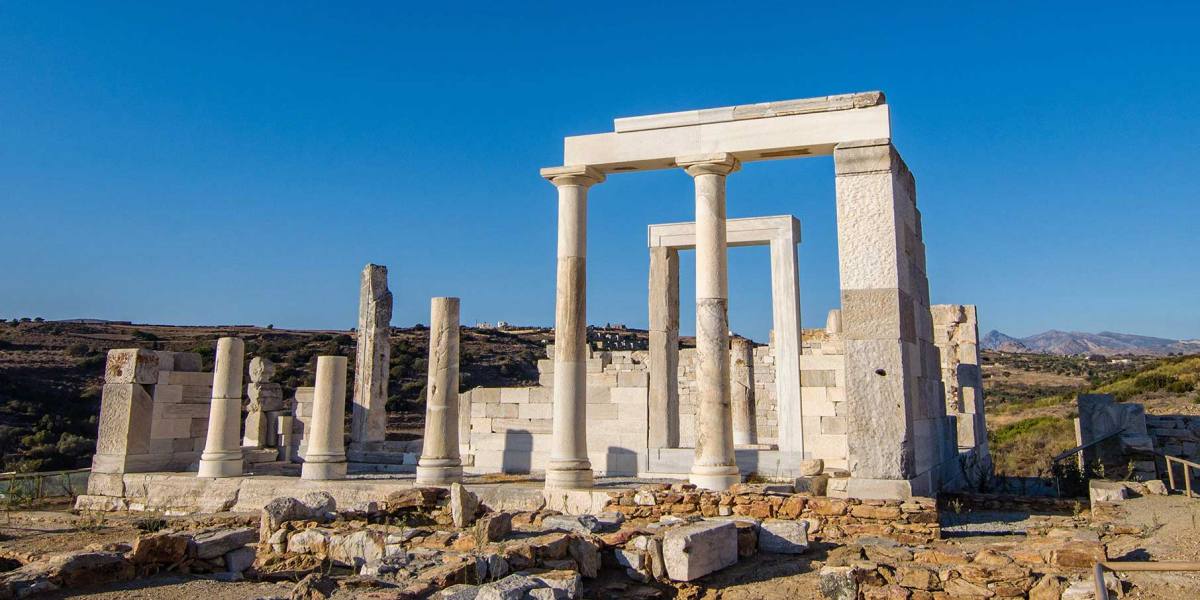 Sagri lies 11 kilometers from the port, between one of the most fertile areas of Naxos. One of the most important landmarks villages has windmills, Byzantine churches and castles. Next to the Byzantine church of Panagia Orphani is the tower Paleologos, its coat of arms indicates that it was built in 1699, and now has been restored and habitable. Also within the village you will find the monastery of Agios Eleftherios that the Ottoman era functioned as a secret school, now houses the folklore museum. Undoubtedly, visitors need to devote time to the archaeological site of Giroula, a.k.a the Temple of Dimitra. It is 3 km from Sagkri and signs will lead you to one of the most impressive parts of Naxos. The church built entirely of white marble between 530-520 B.C., dedicated to the goddess Dimitra until the 6th century converted into a Christian church. It is rumored that its design has been based on the Parthenon. In this area, there is a unique museum, awarded in 2004 for harmonization with the natural landscape.

Six kilometers further, you will encounter the town of Filoti. This is the biggest village of Naxos built between two slopes. The sights too many to explain. Visit Panagia Filotitissa, Barotsis Tower, the Paspaliti windmill, the Byzantine churches of Our Lady of Aryan and Arhat and St. Eustatius. On the main road you will find the unique collection of Greek Coins of Nick Moustaki.

Leaving the village, you can see the panoramic view from an esplanade road towards Apeiranthou. Shortly before, on your right hand side, you will see the sign that leads you to the famous Fountain of Arion with running water and sycamore trees that create a beautiful environment. At this point begins the path that leads to the cave of Za and then, on top of the highest mountain in the Cyclades which took its name from the god Zeus, who according to tradition was born in Crete and then grew up in Za of Naxos.

The next village you come across is the beautiful Apiranthos or t’Aperathou as it is called by the locals. Impressive with its medieval architecture and faith in traditions that distinguish the residents. Marble narrow streets, often covered with vaulted arches, towers that are representative samples of Venetian fortification, two-story stone houses with atypical architectural details, and small squares for gatherings. The tower of Zevgolis ( 17th cent. ), built on a rock at the entrance of the village is also quite astonishing. Both in the village, and the surrounding area you will find many valuable Byzantine , Byzantine churches and other .. Worth visiting are five small but very interesting museums ( archeology, geology, folklore, natural history museum, children’s museum of culture ) and the exhibition of women’s artisan cooperative. Just 3 kilometers southwest of the settlement of the village you will find the chapel of St. John, where you will enjoy a wonderful view and take very commemorative photos.

The village does not have a beach, since it lies deep in the hinterland, but the nice Moutsouna beach awaits you with wonderful sea and sand. One reaches Moutsouna following the road from Apiranthos and beyond . We recommend that you drive carefully as the road is narrow and twisty. The beauty of the area will overwhelm you. Moutsouna is a natural harbor on the island and the picturesque village built on the beach will fill unique pictures. From here, in the olden days they used to load emery brought from the mines up the mountain and lowered with the wonderfully preserved funicular for you to admire. 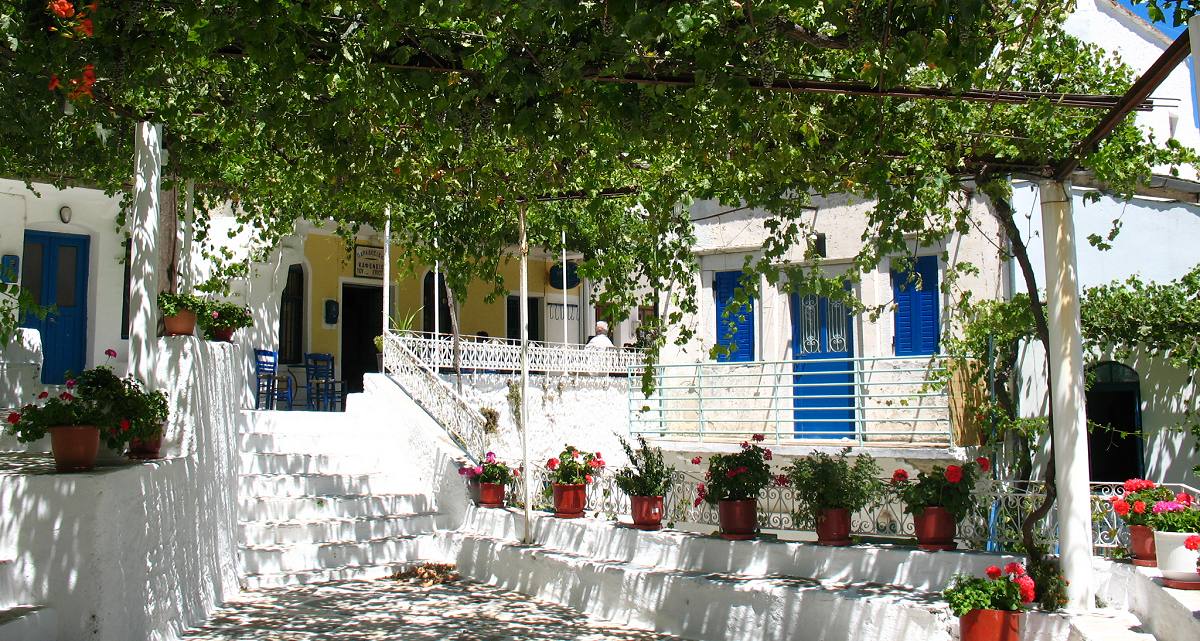 From Apiranthos again following the main road, you will arrive at the Cross of Keramotis. Next stop in Koronos, a beautiful village, built in the valley, at an altitude of 540 meters. Koronos prewar developed owes much thanks to emery. The only place in Greece where this rock can be found and is considered high quality. To the east of the village are the emery mines as well as the premises of the three entrances and the installation of air transportation that reaches the port of Moutsouna.

The main characteristics of the emery mines are narrow entrances and their labyrinthine galleries. Do not attempt to visit them yourselves inside as there are many risks to careless visitors. Admission to these mines is only in agreement with a local who can guide you. Leaving the village you can visit the Museum of Emery and Industrial Park.

Koronos retains the traditional island style and has great architectural interest with its mansions, folk houses and steep lanes with many stairs. The village and the surrounding region offer many attractions which attract many visitors who come here to admire the old houses of exceptional architecture, the picturesque square with running waters and traditional cafes and taverns, to walk on the narrow streets and pass under beautiful arches creating an atmosphere that moves them. You can also prey at old churches, or notice the preserved old mills and visit interesting folklore collections and exhibitions of traditional embroidery.

About 2 km before the village there is a road that leads to Argokoili where you can find the monastery of Panagia Argokoiliotisas. From here, the view to the east includes the islands of the Cyclades and Dodecanese Ikaria and mountains of Asia Minor, where the atmosphere is clear.

On the south side, shortly before Koronos begins a road that ends on a downhill with consecutive turns in Lionas.

You will go for a swim, with large perfectly round white pebbles and crystal clear deep waters. On our way to Lionas will see galleries of emery.

On the north side of Koronos following a green route with walnut trees, oaks, laurels and orchards, will get to Apollonas. It is a beautiful fishing village on the northeast coast of Naxos, with great beaches that combines sand and pebbles. This existed in antiquity marble quarries. Very close to the village, at the entrance to an ancient quarry, lying on the ground, from which it was detached, an unfinished statue of Kouros, with a height of 10.45 meters, which dates back to the beginning of the 6th Centuryand most probably represents Dionysus.

On the way back to the town and at about 6 km, you will find the monastery of Agia, which is dedicated to the Virgin Mary. In a beautiful landscape, with lush vegetation and turquoise waters, the monastery stands proudly over the years and welcomes visitor. 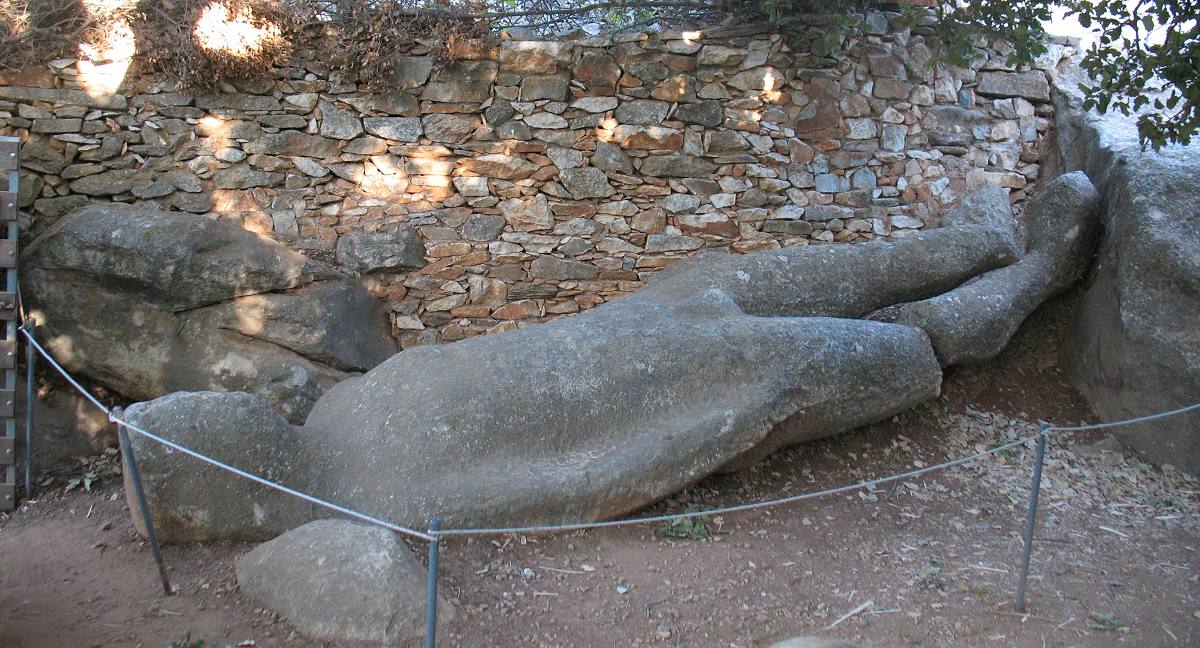 Another village of Naxos worth visiting is Melanes. One of the oldest villages of the island just 8 km from the port of Naxos. It is built on one of the green valleys of the island, with running water that once powered their deserted today, watermills. Near Melanes in Flerio, in an olive grove, lying on the ground, in a position that the ancient craftsmen left it, an unfinished Kouros ( the second on the island ), a project from the 7th Century B.C.

Another very important monument is the tower of the Jesuits , in Kalamitsia. It is a medieval building dating back to about 1680 A.D. Perhaps the most important building of the Middle Ages, Greek and Mediterranean.

One of the best car rental companies we’ve used on our holidays in the Greek Islands. We hired a Citroen C3. It was a comfortable car for 4 of us and an easy car to drive around the island. We were met at the airport, the car was very clean and we dropped the car back to the port on our departure. All communication/emails with the company was good. Highly recommend this car rental company on Naxos.

Best car rental company any where! Very flexible with pick and drop off times. They wait for us at the port, super friendly owner. He provide information for what to visit in Naxos. We were totally satisfied and more: the price was great, the car Fiat Panda was new, very clean and comfortable. Everything about our experienced was absolutely first class. I would highly recommend Escape car rental without hesitation, and would use them again, again without hesitation highly recommend when traveling to Naxos.

Exceptional service at cheap prices. We had a car for 5 days and all was perfect. They have a variety of different cars, models and prices.we didn't want to spend a lot of money and although they mention that the car which we wanted to rent wasn't a brand new model it was excellent in very good condition and very clean. Friendly and helpful owner . I highly recommend when traveling to Naxos. We hope to see you again in the future.